Richard Kellerman and Paul Nielsen established NK in 1978. Richard was working as a physical chemist at the Xerox Research Labs in Webster, NY, when family friend coach Ted Nash recruited him to devise a product that would simplify the coxswain's many jobs on the river. Richard and Paul ingeniously combined rechargeable batteries, power amplification, timing and stroke rate measurement into one robust, waterproof unit – forever changing the sport of rowing. No more would coxswains launch with a cardboard megaphone strapped to their head, a stopwatch taped to one leg, and a rate watch taped to the other – all of which they were expected to use while steering and calling the race. Born in England and possessing the British love of tongue-in-cheek humor (and Gilbert and Sullivan), Richard dubbed their new product the “Cox-Box” and they began production in the basement of Richard’s suburban home. Production eventually grew to take over the basement, the garage, and the spare bedroom as every major rowing school and club in the country adopted the Cox-Box as required equipment.

1977 - Richard Kellerman and Paul Nielsen meet Ted Nash through a mutual friend, and are introduced to the need for reliable voice amplification and timing systems for rowing to replace the cardboard megaphone, stopwatch, and ratewatch coxswains used at the time.

1978 - Nielsen-Kellerman Co. is incorporated in New York state and Richard and Paul design the first Cox Box while still working at Xerox as research scientists.

In 1984, NK expanded their product line to include the first generation StrokeCoach stroke meter and time designed for scullers and straight boats, as well as the Chronostroke rate and stopwatch for rowing coaches. Richard and Paul also teamed up with two other rowing innovators, Dick and Peter Dreissigacker, who had launched Concept 2 just two years prior to NK. Concept 2 had developed a rowing machine, but it lacked a meaningful measurement of output. NK developed the measurement methodology and designed and manufactured the original monitor for the first generation Concept 2 rowing machine.

With the development of these four products, NK had grown too large for the basement of Richard's house. In 1984, NK relocated to an old rayon-making factory in Marcus Hook, PA. The research and development continued, with NK developing the PaceCoach and the SpeedCoach over the next 10 years and also redesigning the CoxBox, CoxVox and StrokeCoach to be smaller, lighter and easier to use. 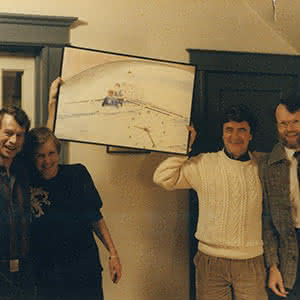 1984 - The Concept 2 Performance Monitor is introduced.

In 1996, NK expanded into a completely new product line by launching a line of wind and weather instruments, called Kestrel® Weather & Environmental Meters. The company was growing rapidly, so once again it was time to move to a larger facility located in Chester, PA. During the tenure at the Chester facility (1996-2004), NK released a total of 4 models of Kestrel Weather & Environmental Meters, expanding from simply serving outdoor recreation into many professional markets including firefighting, agriculture, construction, police work, aviation, and shooting science. On the sports side of the business, NK added the SpeedCoach Gold and introduced the Interval 2000 Rate Watch® for the swimming and track and field markets.

1995 - The StrokeCoach II is introduced.

1996 - The SpeedCoach Red is introduced.

In 2008, NK expanded its business and facilities to a brand new 25,000’ manufacturing facility in Boothwyn, PA. The sports product line grew to include the SpeedCoach XL – providing coaches with wireless real-time visibility of the performance of their crews. The 4th generation CoxBox was launched, featuring removable batteries and additional memory and features.

The Kestrel Weather & Environmental Meters continued to grow, launching five new specialty Kestrel Meters. The fastest growing segment of Kestrel’s business was focused on shooting sports. After first being adopted by the military combat weather troops, the Kestrel 4000 had migrated to the Special Forces sniper teams to support their need for accurate environmental measurements to input into their ballistics computers. The Kestrel team, once again the innovators, collaborated with the leading experts in ballistics calculators to provide firing solutions directly from the Kestrel. For the long-range shooting community, a Kestrel with ballistics is just as much required equipment as a CoxBox is for any rowing eight on the water.

2003 - The SpeedCoach Gold is introduced.

2009 - The StrokeCoach Surge is introduced.

In 2010, NK bid farewell to their founders as Richard and Paul retired and NK transitioned to management-led private equity backing. The core NK engineering, sales, marketing and manufacturing leadership team took NK forward without a beat, continuing to develop new products and build them in the USA. The additional investment helped NK to continue to grow and innovate, tackling human heat stress, agricultural spraying safety and advanced biometric analysis of rowing with the EmPower Oarlock.

In 2018, NK celebrates our 40th Anniversary. Fewer than 7% of all US businesses have survived for 25 years or more, and fewer than 30% of family businesses make it to the second generation. As NK commences its fifth decade of operation, we are extremely proud to be standing among this small group of successful survivors. Through multiple recessions and rapid changes in technology, our founders Richard Kellerman and Paul Nielsen put their money, energy and smarts into building a company that has lasted. And, we did it “our way” – inventing innovative products that defined new categories and building them from scratch in the United States. We are grateful to our customers who demand the best of us and reward us with their dollars and their loyalty. We plan to be here for another 40 years, and to keep raising the bar for ourselves in providing actionable knowledge to help our customers be faster, safer, more accurate and more successful in their endeavors.

2011 - The CoxBox Mini is introduced. After being asked for a solution for Coxswains that do not need all of the info that a regular CoxBox can provide, the CoxBox Mini just allows a coxswain's voice to be amplified through the speakers in the boat.

2011 - The Blue Ocean Megaphone is introduced. NK tasked itself to build the world's most rugged and reliable megaphone for rowing and other athletic coaches, and succeeded. It was quickly adopted by law enforcement and military programs all over the world because of how reliable it is.

2012 - The SpeedCoach GPS is introduced.

2014 - The SpeedCoach SUP is introduced.

2016 - The EmPower Oarlock is introduced.